Posted on April 6, 2018 by pastorrebeccagraham 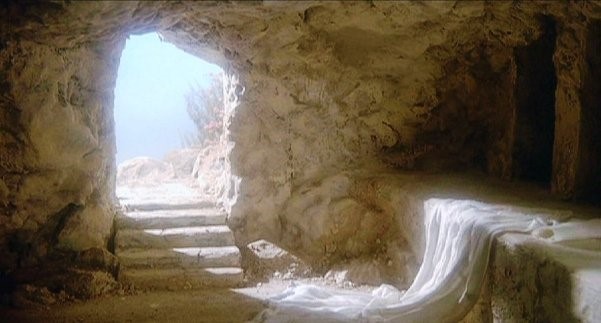 If we look closely at this very familiar text, we find that something very interesting happens, in today’s gospel passage.

Several interesting somethings, really, but I want to look at the last one, in particular.

We’re told: “when they looked up, they saw that the stone, which was very large, had been rolled away. As they entered the tomb, they saw a young man dressed in a white robe sitting on the right side, and they were alarmed.
‘Don’t be alarmed,’ he said ‘You are looking for Jesus the Nazarene, who was crucified. He has risen! He is not here. See the place where they laid him. But go, tell his disciples, and Peter, ‘He is going ahead of you into Galilee. There you will see him, just as he told you.’
Trembling and bewildered, the women went out and fled from the tomb. They said nothing to anyone, because they were afraid.” (Mk 16:4-8)

So, list of unusual events, in these brief verses:
• First of all, the stone is rolled away
• Second, there is no sign of the guard that the Romans posted at the behest of the Sanhedrin to prevent Jesus followers from stealing the body
• Third, Jesus is risen from the dead, he is not here, but, instead, we meet the messenger
• And lastly although the women are given a message to convey to the disciples, they are afraid, and we’re told that they said nothing to anyone.

So, in four verses, we have at least four very unusual events taking place. We have four pieces of evidence that have been and remain a mystery of our faith.

We have four pieces of evidence that this is greater than anything we could ever imagine.

But when we look at the fact that the women, the only witnesses that Mark gives us in his gospel, are overcome with fear, and they don’t say anything, the true miracle, then, is that we are here, today.

In John’s gospel, the first witness is Mary Magdalene, who then runs and tells Peter and John that the tomb is open, that Jesus isn’t there. She’s not yet a witness to the resurrection until she encounters the risen Christ in the garden, who then gives the message “Go instead to my brothers and tell them, ‘I am ascending to my Father and your Father, to my God and your God.’”
18 Mary Magdalene went to the disciples with the news: “I have seen the Lord!” And she told them that he had said these things to her.” (Jn 20:17-18)

And we’re very familiar with this image. With Jesus appearing to Mary in the garden, with the message being carried back, with Peter and John being the ones to enter the tomb, but that’s not the message that Mark gives us, today.

Instead, today, we’re told that Mary Magdalene, Mary the Mother of James and Salome are the women to go to the tomb. (Mk 16:1)

We’re told that they encounter the messenger, who, because circumstances are not as they expect them to be, scares them, and sends them on their way with Jesus message, with God’s message, with the news of the resurrection, with the hope that today isn’t as dismal a day as they’d expected it to be.

“8 Trembling and bewildered, the women went out and fled from the tomb. They said nothing to anyone, because they were afraid” (mk 16:8)

At the same time, the true miracle is that they eventually overcame their fear, their bewilderment, and they compare notes, they talk to each other, they come to the conclusion that what they saw, what they witnessed had to be the truth, or they would have found events as they’d expected to find them, when they left the house, this morning.

Then another miracle takes place, one that isn’t recorded here, although the results of it are visible all around us.

The women, Mary Magdalene, Mary the mother of James, and Salome, shared what they had seen, what they had learned what they heard with Peter, and the disciples. They shared it with those they knew who had followed Jesus.

They shared it in market places, and in their daily round of tasks, and I know that they did this because we are here. Each one of us is here, today, two thousand years distant from the event we see related in today’s gospel passage because of these women.

I know that the women were, then, and today, continue to be the first witnesses of the resurrection because they were the ones to go to the tomb, before sunrise on the first day of the week.

They were the ones to enter into the tomb. They received the message from the young man dressed in a white robe.

They were the ones to carry that message, that telling with them, and to share it, eventually with Jesus followers, and with the rest of the world.

The last time she was here, my mother asked me if I remembered her teaching me to read, and I had to admit that I remember reading from a very young age, but I don’t remember learning to read.

I love to read. It fills my leisure time with tales of imagination, with knowledge, with places to inspire future travel, one day in my life. It opens new ideas to my mind and my imagination, it helps me to learn of what other scholars are saying on theological matters, and to keep up with the news that happens all around us.

And perhaps we think of our lives of faith in the same way as my mother asking if I remembered her teaching me to read.

We remember, and we continue to participate in our lives of faith. It supports us, it fills us, it enables us to go out into the world, like the women, and share our faith with the world all around us, but at the same time we don’t necessarily have a living an active memory of having learned that life of faith.

Sure, we can probably all tell memories of attending Sunday school, of sitting quietly during church services, maybe even drawing pictures on the church bulletins, probably as we sat on the kneelers and used the pew as a coloring table.

We can all relate tales of growing in our lives of faith, often without realizing the life long relationship we have been forming with God, with Christ, with the Holy Spirit, in such a manner that has sustained, and continues to sustain us, still, today.

But what the gospel tells us, today is: “8 Trembling and bewildered, the women went out and fled from the tomb. They said nothing to anyone, because they were afraid.” (Mk 16:8)

In one trip to the garden that holds the tomb, everything has changed, and at the same time, nothing has worked out as they thought it should.

But that’s not the way things have gone.

Instead, they discovered the tomb open. They discovered that Jesus is gone. They’re told that he’s been raised from the dead, and the job of telling everyone else falls on the shoulders of these emotionally exhausted women, and they’re scared.

But if this were where the story ended, then the disciples would not have gone to Galilee, except, perhaps to resume their lives as fishermen, as tax collectors, as whatever trades they know and came from to follow Jesus.

If this were where the story ended, then we would not be sitting here, today, surrounded by others who have similarly grown up in a life of faith, grown up in the tradition of attending church, on a regular basis, so that we can be fed, heart and soul. So that we can be supported in our lives of faith, in the church, and in the community around us.

We are the ones who lovingly, and gently encourage them to overcome their fears, their confusion, and to tell us what the messenger said, what they saw, and to help us, the disciples, to carry that message into the community, into the world.

Today, we hear the message of the women for the first time, and we are the ones who need to accept it, reject it, act on it or toss it out with today’s recycling.

How can we take this information? How can we make it a part of our lives, and of our journey in Christ?

I was perusing a website, ironically, for a company called “Harry’s Razors”. A major part of their mission, as a 21st century company is to give back to the world around them, around us. And to do that they’ve partnered with a number of international agencies to help with emerging and modern perceptions, and problems. They say: “Society puts lots of pressure on guys to act a certain way. Outdated stereotypes can be harmful, not just to guys but to communities,” and their message goes on from there.

But what does it mean today, for us to be the disciples? To be the ones who hear the message of the women, the message of the young man in the tomb. This puts a certain expectation on each one of us to carry the message of the resurrection into the world. It calls us to gather and to study the bible, to strive to rise above the expectations of society, for both men and women, to see where and how God is calling us to be active in the community, and in our lives of faith.

But all of this begins right here, it begins right now, as we greet these women, these witnesses of the resurrection, and encourage them to overcome their fears, to tell us the good news of salvation.

To tell us that Jesus Christ has risen from the dead.

To tell us that he goes on ahead of us, and all we need to do is follow.

To tell us, the followers of Christ, that we are the disciples, today, and that we still follow where Christ leads, even through death, into an even greater image of life than we could ever imagine.

Not just today, but every day, when we hear the message, when we follow where God leads.