Posted on January 11, 2018 by pastorrebeccagraham 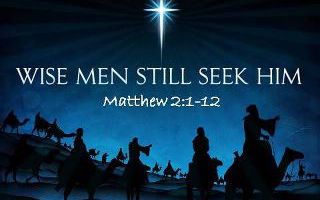 Creator of the heavens, who led the Magi by a star to worship the Christ-child: guide and sustain us, so that we may find our journey’s end in Jesus Christ our Lord. Amen.

I find today’s gospel is beautiful in its contradictions. In the way that the worlds expectations are overturned by God’s action in the world, and for the world.

It’s in these contradictions that we find God working, to not only show us our Lord and Saviour, but how the world in general still perceives power, and specifically divine power, divine interventions in our world today.

Today we find the Magi, those considered to be the wisest of the wise by other societies, and they’re searching for Jesus. They’re looking for the fulfillment of prophecy, for the realization of divine influence in the world all around us.

But, they don’t find him where they would expect to find “the one who has been born king of the Jews.” (Mt 2:2:2a)

What they expect is a palace, a grand place, the infant child being served by servants, the parents being honoured above all others.

Yet, what they do find, when they arrive in Jerusalem, is a scared, and isolated individual, in Herod.

He’s probably paranoid at not only the thought that someone might come along and take his power, his position, his place from him, but that his life is able to be forfeit at the hand of the closest assassin. In his life he has grasped for power by tooth and nail, and, he’s not at all thrilled or encouraged to hear that a king of the Jews has been born.

After all, he is king! By the grace of Rome, Herod is the king of the Jews, not someone born out of the depths of dusty, ancient prophesies! This is a David and Saul type of situation, and if we remember correctly, that didn’t end so well for Saul!

And so, the wisest of the wise, those considered the ultimate authorities in wisdom, need to keep looking. They need to keep following where the star leads to find the one for whom they are seeking.

They are seeking the one heralded by a “star, when it rose and have come to worship him.” (Mt 2:2b)

And, these are just a couple of the contradictions that we find in today’s gospel.

These Magi, these, the wisest of the wise, known throughout the regions of the east as those to whom no question is unanswerable, they have come to the wrong door in search of the one “who will shepherd my people Israel.” (Mt 2:6b)

And this is the clue that the Magi have missed. God’s love is not just displayed in grand palaces. At the same time, God’s shepherd is not found in positions of opulence, grandeur, or wealth.

After all, we are not in opulence, grandeur, or wealth, in our lifetimes, yet we have God with us and active in our lives, still today.

Yet, today we commemorate that the Magi, these non-followers of the Jewish ways, lifestyle or religion, who have found their way to the cradle, to the manger, to the lodging of the infant Messiah and his earthly parents. We commemorate that God’s message is so much bigger than just saving Israel, but is opening the doors for salvation for all people. That God’s love is bigger than one nation.

So, today, we find these men, whose lives are surrounded by wealth due to the patronage of the rulers who come to them for advice. They live surrounded by the opulence in their day-to-day lives, who travel with animals and entourage to find this “king of the Jews”. We find their expectations being turned on their ears.

After all, we cannot expect them to schlep their gear, for their studies of the world and the heavens around them, on their own. We can’t really expect them to cart their own food, their tents, their clothing, and the gifts for the new born king on their own backs, can we?

In the hymns we account them as kings, and kings don’t carry their own luggage.

Yet, these wealthy and pampered individuals continue to follow the star, and they find their way to Bethlehem.

They follow the light of the star, and they find the child in lowly circumstances. After all Bethlehem is experiencing overcrowding, at the moment, due to Caesar’s call for a census; and in those days, a census could take two years, or more, to complete.

So, sometime within the first years of Jesus life, these the wisest of the wise, come to Bethlehem, and they find the child who was born in the stable.

“The star they had seen when it rose went ahead of them until it stopped over the place where the child was. 10 When they saw the star, they were overjoyed. 11 On coming to the house, they saw the child with his mother Mary, and they bowed down and worshiped him. Then they opened their treasures and presented him with gifts of gold, frankincense and myrrh.” (Mt 2:9b-11)

To make things complete, compact in our Christmas eve creche’s, in the movies we see the Magi arriving on the heels of the shepherds, yet the light of a star can carry on for years as long as the light travels from its source to our night skies. So, for as long as it takes the Magi to arrive at the side of the Christ child, that is as long as the star shone in the sky.

So, then, here we find another contradiction.

After finding the child, after following the star, the gifts that these the wise, the Magi bring to the child are better suited for one born in a palace not next door to a stable, on the outskirts of a poor town.

They bring gold –as one story tells it “the gift of gold, for the king of kings.”

They bring “the gift of frankincense for the priest of all priests.”

And they bring myrrh – a foreshadowing, at his birth, of his death, as myrrh is an embalming spice. “The gift of myrrh, to honour thy sacrifice.” (The Nativity Movie)

A joke on the internet says that if the wise men had been women, they would have asked for directions, arrived in time to help birth the child, cleaned the stable, and brought such gifts as diapers, casseroles, and baby clothes.

This is what we see as practical gifts for a child, especially one born today, but do we really see these the wisest of the wise having the wool pulled over their eyes by God to such an extent that Herod is paranoid and jealous in his palace, in Jerusalem?

They bring kingly prophesy laden gifts to a humble house in Bethlehem, and they bow down and worship him, in a humble house, with his parents Mary and Joseph.

But these gifts have more to do with the prophesies they’ve interpreted, prophesies that have brought them our of their comfortable libraries and observatories, to bring them to this point, instead of what kind of a mobile to hang above the crib of the Christ Child.

They bring gold, a sign of his kingship, if not here on earth, then definitely within our hearts and lives. Frankincense, a sign of his role within our lives and hearts as the one who brings us back to God’s love; and myrrh, for the sacrifice that Jesus becomes on our behalf, on the cross.

A sacrifice that opens the doors to God’s kingdom, to be able to invite those of us to believe to come and to be a part of God’s eternal love, light, and life.

Yet, God has said, through Paul, that God’s wisdom is a stumbling block to the wise, and is considered foolishness.

We can see that in the way that the Magi, the wise men, these kings of the east are kneeling on a dirt floor, in a small house, in Bethlehem, worshiping “the one who has been born king of the Jews.” (Mt 2:2b)

What is it that we can learn from these apparent contradictions in the message we see from Matthew’s gospel?

How are we able to overcome our own burden of wisdom so that we can open our eyes, our hearts to God’s love, God’s determination to open the doors of the kingdom of heaven to each one of us?

As Matthew points out, in today’s gospel, we will never find God where we expect. We want to go to a special place, and encounter God there: to the wise man on the mountaintop, dispensing wisdom; to the most beautiful places in the world, to the most mystical experiences known to humanity.

Yet, we find God in our hearts, in our lives, in each other’s lives. We find God in the humble experiences society, serving our neighbour as we wish to be served.

We look for Christ at the manger, and encounter God’s love in the relationships we have between each of us, no matter where those relationships begin.

In the reading from Ephesians, Paul tells us: “you will be able to understand my insight into the mystery of Christ, 5 which was not made known to people in other generations as it has now been revealed by the Spirit to God’s holy apostles and prophets.” (Eph 3:4-5)

Our lives of faith, the revelation of the Christ child in the poorest regions of Bethlehem, yet heralded by the star, this is God at work for the salvation of all of humanity.  This is the contradiction that God uses to get our attention. Not just for you and for me, but for all those who have yet to meet Christ, in the stable, in the manger, in the presence of the magi.

We find Christ where we least expect, in the least of those in society, as well as in the depths of our own hearts and lives, when we choose to open them to the love that God shows, not just to the wise, but also to those of us who believe.